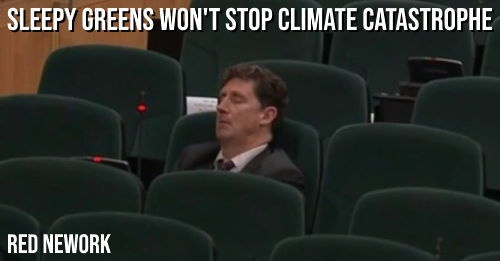 A newly released report shows that climate disaster is looming - and the sleepy Greens won't stop it.

The Intergovernmental Panel on Climate Change (IPCC) report summarises the work of an astonishing 14,000 scientific reports.

It shows that we may reach a temperature rise of 1.5 degrees Celsius by 2034 - a situation they describe as "code red for humanity".

We've already seen the results of a smaller rise on the news every single day - unheard of rainfall, record temperatures and spontaneous wildfires that are out of control.

Meanwhile the Irish Green Party refuse to go after the corporations and want to hit working class people with new taxes as the pretend to care. They are Green in name only.

They are useless and only do harm to real climate activism. They just tie it to the very system that we need to challenge and fight to replace - to prevent disaster.

The same global corporations that generate massive inequality are driving us headlong into climate catastrophe and the Irish Green Party just play along.

They are like vampires in their hunger for profit. They won't stop unless we make them stop.

You cannot expect to stop climate change by working with the forces that are causing it. You have to fight them. Only a people power rising can take the system on and win us back a future.

Climate change and the emergency that is facing us all is a massive part of what we stand for in the Red Network within People Before Profit. EcoSocialism is our best chance to tackle climate change head-on. Why not join our movement and be a part of Irelands largest Socialist movement?

Use our contact page to get in touch and find out more about us.