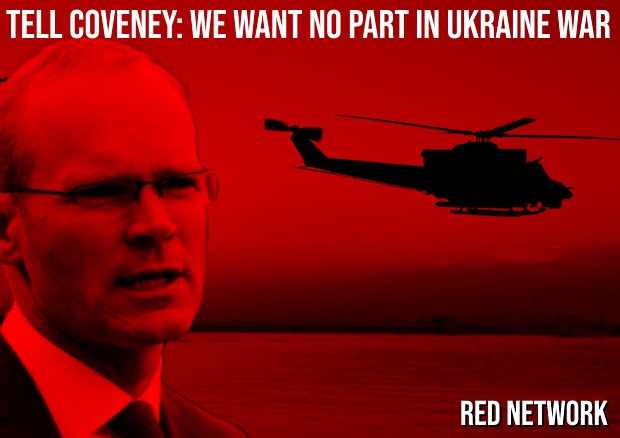 putin is a war monger, as are the usa and nato. our neutrality matters
We oppose all imperialists and war mongers

Tell Simon Coveney: we want no part in war with Russia.

The Irish government have been trying to get us into an EU army for years, that's why they signed the PESCO deal.

They will accelerate the erosion of Irish neutrality using Ukraine as an excuse.

We didn't fight an Empire for centuries to volunteer to be cannon fodder for the interests of EU bankers.

The US military have already been freely using Shannon as a warport for decades.

The military writer Von Clausewitz once wrote "war is a continuation of policy by other means".

The media won't tell you about NATO's decades of Eastern expansion or remind you that they are still picking the corpses of Afghan and Iraqi children from their teeth.

When big powers threaten war with each other it is up to workers in each camp to pull their own rulers back from conflict.

We need to expose the reality of NATO and pull the Irish government back from participating in this war.

As the German socialist Karl Liebnecht said at the outbreak of the First World War: "The main enemy of every worker is at home".