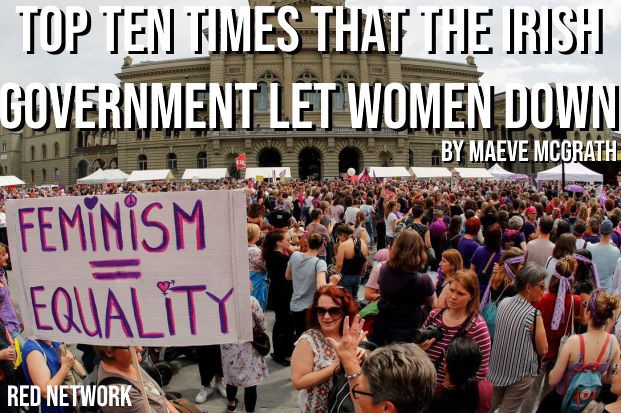 The Irish state has let women down again and again - it is important to remember all the battles we had to fight to get here - and think of the ones ahead of us.

The State and the Church worked hand in glove to enforce prison and labour on women - usually working class women - who became pregnant. The last one only closed its doors in 1996.

2) The brutality of symphysiotomy

The horrific procedure was a relic of medical history but carried out on women in Ireland as they felt that a caesarian section would result in fewer future pregnancies. The women that were subjected to this were left with agonizing pain, incontinence, and many other crippling symptoms.

For years dozens of women were left with untreated cervical cancer, as they had been wrongly told the results of their smears were clear. Instead of fast tracking everything these women needed, the government let them spend their precious time fighting legal battles in court rooms.

The barbarity of our legal system was brought to the world's attention in 1992 when a 14 year old girl was forcibly detained in the Republic and prevented from travelling to access an abortion after she was raped. Over the following 26 years, it was the vibrant grass roots campaign that finally brought about a referendum and 'yes' vote to legalise abortion.

5) The Mother and Baby homes

The FG/FF/Green government came very close to locking away the contents of an investigation into these 'homes'. Online pressure to #RepealTheSeal prevented them doing so but the commission is still seeking to destroy audio recordings from that investigation.

6) Discrimination against the trans community

Trans women and men have to wait an average of three years on a waiting list following their first referral. They are then subjected to an archaic, and non-evidence-based psychiatric assessment model.

The women that fought shoulder to shoulder with men in the 1916 Rising were quickly relegated to their position as second class citizens - often impoverished with little to no financial support from the state.

Fine Gael has been steadily cutting funding to rape crisis centres and women's shelters. The centres - such as in Nenagh - often have to close and direct women to another county.

Ireland was one of the last European countries to remove the marriage bar - a practice of forcing women to resign should they get married and bar married women from applying for vacancies.

During the recession, Joan Burton and the Labour party chose to attack the lone parent's allowance - not the bankers, CEOs, or even their own salaries.

We should never forget what women, particularly working class women, were subjected to.

Inequality is still rampant in Ireland and the fight must continue for a socialist Ireland, where inequality and oppression are things of the past.