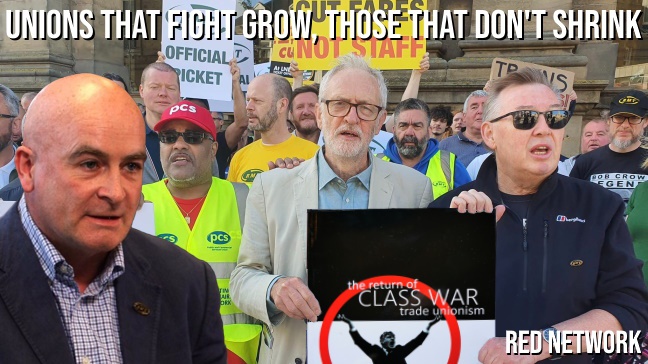 fighting unions will always grow while those that don't will shrink
Lessons for Irish unions from recent RMT activist Mick Lynch's stance!

In the wake of RMT union leader, Mick Lynch, taking on the stuck-up British media establishment Google searches for unions have exploded.

This is the "secret" most unions have long forgotten: if you fight the union grows, strikes build union muscle.

Partnership has seen unions here abandon struggle to get access to the corridors of power, but partnership hasn't delivered anything for workers.

The wage share of the economy has gone from 75% in the 1970s to just 30% now, while union density has collapsed.

To get fighting unions it takes more than enthusiasm for a good union leader though, no matter how well they do on the media.

Even left-wing union bureaucrats can change direction, do a deal or get ousted by the right in the unions.

When that happens, you need a leash around the neck of your union boss. We need grassroots control.

We need to build rank and file networks of opposition in every union, fight alongside union leaders when they do fight but be ready to take them on when they won't.

If you'd like to read more on fighting unions get a copy of "The Return of Class War Trade Unionism" by our own James O'Toole from our online store link above.