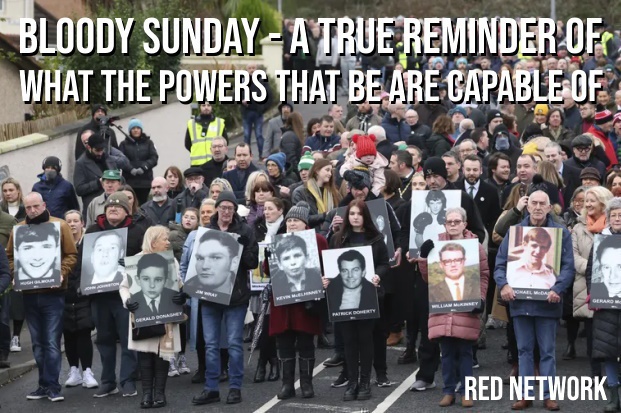 "I am coming to the conclusion that the minimum force necessary to achieve a restoration of law and order is to shoot selected ringleaders."

He was instructing his ranks to prepare to shoot down working class Catholic youth who were defending their communities.

The Bogside in Derry had barricaded itself in to defend the community against vicious sectarian attacks by the notorious B Specials.

In Belfast, Catholic communities had been burned out of their homes. People in Derry feared there would be a massacre there too.

When British troops came in, they promised they'd stand between Catholic communities and the local police. But that was a lie.

They were there to prevent the civil rights movement escalating into a challenge to the system.

They would not allow any group of working class people to exit the state or declare themselves under community control like "Free Derry".
The monstrous British state shot down 13 people for merely asking for civil rights. A 14th later died from injuries.

It took decades of campaigning to finally get a half-hearted apology from the British government while behind the scenes they moved to protect the killers.

In the wake of the killings mass walkouts by workers spread across factories in the 26 counties, while tens of thousands burned down the British embassy.

If there had been working class socialists embedded in every union branch across the country they could have used that anger to get a general strike.

Without a mass working class avenue of resistance many were drawn into the IRA. They initially promised that a short campaign would bring down Stormont.

But individual acts of terror couldn't break the awful power of the British state and eventually the IRA started talking of a "long war".

The Good Friday Agreement saw the sectarian state and its communal divisions enshrined in law.

To this day most schools are segregated while communal conflict continues as Stormont elites argue over resources.

The millionaires in the DUP still try to hold onto power by stirring up hate while SF have compromised with neoliberal economic policies that hit workers and the poor.

Meanwhile the issues that inspired the civil rights movement, like housing, remain unaddressed as privatisation became the economic orthodoxy.

Over 200 people have died on housing waiting lists in the 6 counties over the last while. Inequality is rampant.

Bloody Sunday acts as a warning of the true nature of the powers that be and what they are capable of.

But even their monstrous states could not stand against a massive strike wave of workers that held the economy hostage.

We have immense power if we learn how to use it.